Each month a roadworks report is issued by Dorset Council. A full list of current works can be found by clicking on the link below.

Bere Regis Parish Council is delighted that our community has voted decisively in favour of adopting our Neighbourhood Plan. 447 votes were cast in favour and 92 against, with a turnout of 40.19% of the eligible voters.

We very much hope the landowners and developers will get on with applying for consents and building the new homes as rapidly as possible, so as to keep disruption to a minimum.

We look forward to working with residents on the new facilities that the new plan will make possible.

All parishioners are invited to come along to the Village Forum on Saturday 27th April, commencing 10am at the school hall and running until 2pm.

There will be a brief talk on all that has been achieved over the last year, including the completion of the Neighbourhood Plan.

The official launch of the new minibus service will take place and forms will be available on the day for village groups to sign up to be able to hire the vehicle.

There will also be an open forum discussion on future projects – what would you like to see happen in the village in the future and how can we go about achieving that goal.

There will be tea and coffee available throughout the day and hard copies of the Neighbourhood Plan to take away.

On Thursday 2nd May, 2019, all residents of the Parish will be asked to cast their vote for the Neighbourhood Plan. The Poll will take the form of one question to which you will need to answer a simple ‘yes’ or ‘no’. The question will be:-

Do you want Dorset Council to use the Neighbourhood Plan for Bere Regis to help it decide planning applications in the neighbourhood area?

The Parish Council and many residents of the parish have been working on the Plan for over 6 years now. We very much hope you will answer ‘Yes’ to this question.

The full notice of Poll can be found here: BRNP-notice-of-poll

Having started the plan back in November 2012, it has finally been completed and the full plan can be found; Bere Regis NPlan April 2019

We would like to thank all those who have helped produce this document over the years – to everyone who was involved in the initial working groups, to all those who attended consultations and responded to questionnaires. Without all your help this would not have been possible.

We would like to remind everyone that the final phase before the plan becomes a legally binding document is the referendum. This will take place on Thursday 2nd May and we would urge to vote in favour of the plan. Copies of the plan will be available at the Village Forum on Saturday 27th April at the School Hall.

The Parish Council is in the process of having Dark Lane added to the Definitive Maps Register and ensuring it remains open for public use into the future.

In order to achieve this, we need to accumulate proof of use. If you have used the path continually for more than 10 years, please complete the evidence form and return it to the Clerk. You must return the hard copy of the form as only original, signed documents will be accepted and please do not forget to sign the map as well.

The Mineral Sites Plan identifies specific locations for sand and gravel, crushed rock, ball clay, Purbeck Stone, other building stone and a site for the provision of recycled aggregates. The Plan also proposes the allocation of the Puddletown Road Policy Area.

The Waste Plan, once adopted, will establish the vision, objectives and spatial strategy for the development of waste management facilities in Bournemouth, Dorset and Poole up to 2033. It contains 13 site allocations for new and improved waste management facilities. In addition, the Plan contains a series of detailed policies that will be used when determining future planning applications for waste development.

Maps of the proposed sites, guidance information and submission details can be found on www.dorsetforyou.com/mwdf . The sites of particular interest to Bere Regis Parish Council are those at Philliols Farm (AS12) and Gallows Hill (AS28).

Both sites were submitted in the 2016 consultation and the Parish Council objected to both. Our comments can be found here: Philliols Farm    Gallows Hill

The Parish Council will be discussing the Plan at its January 2018 meeting and members of the public are invited to attend and submit their comments. The consultation started on the 1st December and runs until the 31st January 2018. This will be the last opportunity to make representations before the Plans are submitted to the Secretary of State for Communities and Local Government. 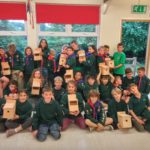 Thirty very energetic Cubs from the Bere Regis Group took up carpentry recently. With nails, glue, timber, and a great deal of noise from their hammers, the Cubs made a collection of boxes suitable for a variety of birds. At the first of the Autumn working parties, the Bere Regis Wildlife and Environment Group will put the bird boxes up along the riverside walk. Do look out for them and, hopefully, next Spring will see many birds enjoying their new homes. Many thanks to the Cubs for all their hard work, the Cub Leaders for their assistance, the Parish Council for providing the materials and Ron Margetts, George Ward and Mike Gee from the Wildlife Group for cutting the timber to size beforehand.

Cllr Ventham welcomed everyone to the meeting and introduced those councillors present before giving a brief outline of the format for the Forum. He then ran through the work and achievements of the Parish Council over the last year, including the current position of the Neighbourhood Plan and an update on the new proposal for the White Lovington site.

A copy of the Power Point presentation given by Cllr Ventham can be found by following the link: 2017 Roundup

Steve Tapscott, Purbeck District Council, then gave a definition of ‘affordable housing’ in terms of the Local Plan.

‘Can the new school cope with the increased housing numbers?’ – Wayne Roberts responded and gave an outline of the school’s future plans, including the possibility of extending the building should the need arise and funds become available.

Downsizing – what is being done for those who are getting older and wish to remain in the village but move to a smaller house? The Neighbourhood Plan includes the potential for this to happen.

Parking – what consideration is being given for the new developments? The Neighbourhood Plan builds in the requirement for developers to ensure there is sufficient, off-road parking – two per household. In the case of North Street, the Plan requires terrace type housing with two spaces per property to the rear of the development, similar to that already in North Street.

Facilities – has the surgery been involved in the Plan? They were approached very early on but have said they do not wish to move from their current location.

Mike Gee outlined the work of the Working Party to date. He informed those present that the Drax Hall is not a listed building but is within the conservation area and could be used for residential development in order to offset some of the cost of a new building. At this stage, it is not known what level of capital that may be achieved by this. This would form part of the work to be carried out during the next phase.

Under the present agreement, the ownership and responsibility of the Drax Hall is in the hands of the Drax Hall Committee. The Community Hall Working Group will be looking at the detail of the Trustee Agreement, the ramifications, etc. of the sale of the existing building and what effect such action is likely to have on funding.

It is anticipated that the new Group will be formed shortly and will be divided into two sections, one to consider the legal aspects of the work and one to begin looking at fund raising initiatives.

Cllr Wharf gave a brief outline of the history of the Purbeck Local Plan saying that, in 2012, the Independent Inspector agreed the Plan in principle but approved it on the understanding that a review would be carried out as he felt the Plan included insufficient housing. Up until 2033, a further 3,000 houses were needed throughout Purbeck.

He then went on to explain the recent unitary consultation and the outcome that had been achieved, together with the representation to the Secretary of State. He explained how this is going to affect the current system of 9 local government councils – six district councils, 2 borough councils, and 1 county council – which is not particularly efficient. 6 of the councils have voted in favour of the unitary authority. Those three that did not (Purbeck, East Dorset and Christchurch) will not be included in future discussions.

The remaining six councils will now need to produce a transformation plan and a mechanism for transferring the various responsibilities from the middle (district) tier once it is removed. This will mean that the parishes will be given more responsibility but they will need the budget to move with that responsibility.

It is hoped that the unitary authority will come into effect in May 2019 at the elections.

White Lovington – concern was expressed regarding the wildlife in the area. Natural England have raised concerns about the development abutting the heathland and there are a number of issues relating to the wildlife on the site. Exiting from White Lovington on to Rye Hill is already difficult at times. The potential for an additional 24 vehicles, plus site vehicles, will exacerbate the problem. It was pointed out that any development would have to take all of this into account and produce the appropriate reports and responses. Cllr Wharf offered to arrange for someone from Natural England to meet with the residents.

Cllr Bates reported that he had recently attended a meeting which had included a talk from councillors based in Wiltshire, which already has the unitary status. He said that parish councils there worked in area groups to achieve economies of scale. This is something the Purbeck parishes may look into once the unitary authority is underway.

Cllr Wharf reported that there are 8 parish councils within Purbeck and they all need to consider the work currently undertake by the District and County Councils and decide what they feel they would be able to take on. This may well involve the parishes linking with neighbouring parishes but there is a great deal of work to be done before this stage is reached.

Facebook – dog mess on the route to school. This was discussed at the March Parish Council meeting and a working party of parish councillors has been set up to consider all possibilities. The working party is being headed by Cllr Tom Bennett and, should anyone wish to assist, they would be welcome to contact him.

There being no further comments, the meeting closed at 11:50am.

We use cookies to ensure that we give you the best experience on our website. By continuing to browse this site you are providing your consent.OkRead more