35 people were present, including County, District and Parish Councillors as well as representatives of parish organisations and residents.

Cllr Ventham welcomed everyone to the meeting and introduced those councillors present before giving a brief outline of the format for the Forum. He then ran through the work and achievements of the Parish Council over the last year, including the current status with regard to the Neighbourhood Plan, before introducing Colin Eversden, the project manager for the new school.

Colin gave a brief history of the work to date and what had been achieved on the site so far. The access road has been completed, the excavation work to level the site has been done, the piling for the main building is almost complete and the ground level foundations are in. The steel framework is half way through and the brickwork will be started towards the end of April/beginning of May. The work is on schedule in terms of the main contractor’s programme. Morgan Sindall is the contractor carrying out the work. They are aiming to complete the work by the end of the year. Road improvements in Southbrook, the crossing point in Elder Road, the footpaths in Southbrook and the final works to the access road will all be done towards the end of the project.

Wayne Roberts, the new head teacher of Bere Regis primary school, was then invited to say a few words. The school now has a new web site which is updated regularly and contains a weekly blog and photographs of the new school’s process. There is a web cam on the new school site and this will be linked to the school web site. This can be found at www.bereregis.dorset.sch.uk. In September 2015, the school took over the running of Ragamuffins and the new school will have a purpose built nursery. The school now caters for children from 2 to 11 years old. They are in the process of recruiting a new nursery nurse in order to bring the staffing level up to full capacity. 17 children started reception in September – 16 of these came from the nursery. The school is looking to become a Multi Academy Trust and are considering all the options – whether to link with Lychett or possibly Purbeck School. They are currently also looking at their travel plan. At the moment, a ‘drop and go’ system has been put in place with the school opening at 8:45am. This has reduced some of the traffic congestion outside the school in the mornings. Once the new school is completed, it is intended that a cycling plan be considered for years 4, 5 and 6, with the children undertaking their cycling proficiency and being encouraged to cycle to school.  The handover date is set for 12th December, 2016.

Cllr Tom Bennett then gave a brief outline of the work of the Open Spaces Group both on the Nature Reserve site on Souls Moor and the work carried out in clearing areas of the stream and woodland to the north of the stream. He explained that, whilst some of the work appears a little drastic, it is all being done under the guidance of the Dorset Wildlife Trust with a view to encourage flora and fauna into the areas. Some areas of the stream have been cleared of weed to enable the free flow of water, whilst other areas have been left in order to encourage weed growth. This provides shelter and spawning grounds for the fish. This coming year it is hoped that there will be two ponies put on the nature reserve site during the summer months. Once the ponies arrive, members of the public are asked to ensure they keep their dogs on a lead, clear up after their animals and do not feed the ponies.

Neal Unitt-Jones then gave a report on the work of the Bere Regis Sports and Community Facility Group. They have been set up to look at the viability of a new facility – does the village need another such facility, will it be used, where it will go, etc. He stressed that the group is in its very early stages and will be approaching all the other groups in the village to ask about their existing facilities and how they see themselves progressing in the future.

Robert Beadell gave a brief outline of the work of the PPG.

Sarah Brady reminded everyone that the Twinning Weekend will be on the 16th September with visitors from Cerences coming to us this year. New families would be very welcome.

Alison Bennett spoke on behalf of the Drax Hall and Pop In. saying that this is Pop In’s 20th birthday year. They have raised over £80,000 for local charities during that time and will be continuing to hold fund-raising events this year – 24th July there will be a cream tea for the over 50s with the Dunovaria Band accompanying the proceedings. Alison went on to explain that the building is now 239 years old and is experiencing a few problems, not least of which is with the stair lift.

Neal Unitt-Jones reported that the Scout Group goes from strength to strength but they still need one more Beaver Leader for the 6-8 year olds.

Cllr Ventham informed everyone that the Parish Council is in the process of organising a street party to celebrate the Queen’s official 90th birthday on Saturday 11th June. West Street will be closed from the Manor Farm Road junction to the North Street junction. Tables and chairs will be brought from the Scout Hut and residents of the parish will be invited to bring along a picnic. There will be live music in front of Cyril Wood Court and the day will run from about 4.00pm until 9.00pm. Everyone is welcome.

If the Drax Estate will not talk to us, does that mean the proposed 70 houses will not get built? Cllr Wharf explained how the number 70 was arrived at and the existence of SHLAAs (Strategic Housing Land Availability Assessment) which are primarily based around Drax land. Bere Regis has a very limited number of sites available so, if the Drax Estate does not come forward, there would be considerably fewer houses that could be built. The old school site could provide for a maximum of 30 houses but, more probably, the number will be nearer 15.

Alison Bennett – where would the proposed new community facility be situated? Cllr Ventham explained that there are a number of possible sites but the group is still in its very early stages to be considering the location. However, possibilities could include Back Lane, the site of the Scout Hut, the bottom field at the Sports Club, the old school site or the new school site. A need has to be proven before the group starts to look at possible sites.

Sarah Welton – she has written to express her concerns about the traffic using West Street and feels that it is being used as a rat run for people who think it will be quicker than going around the by-pass. StatNavs are directing people to Monkey World and Bovington, via West Street as this represents the most direct route.

It was noted that there is no ‘traffic merging’ sign on the approach to the west-bound slip road. Cllr Wharf will look into this. 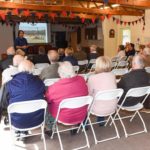 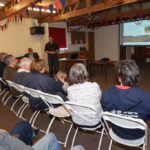